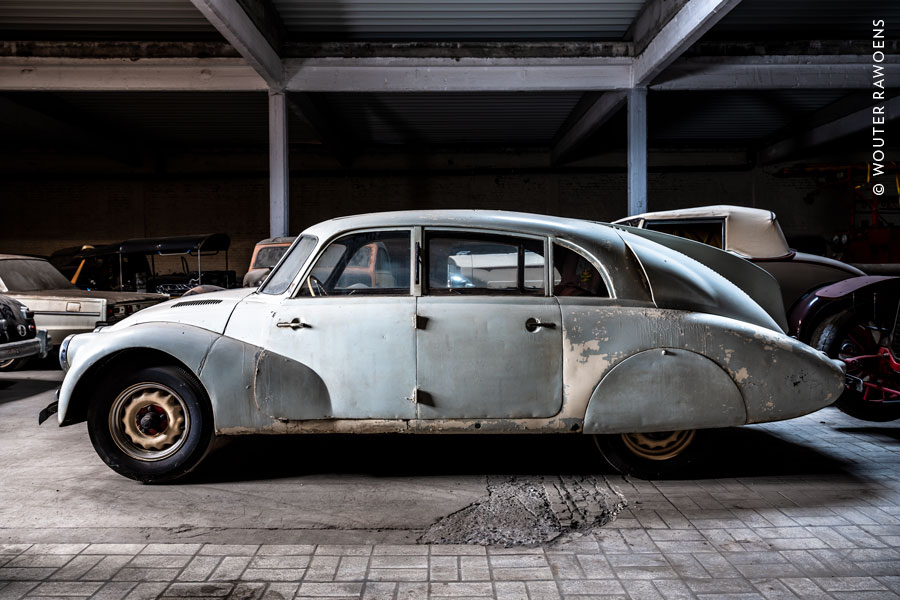 With a grim look on his face, Artur London, the Czechoslovak foreign minister, glanced anxiously in the rear-view mirror. His unknown assailants were hard on his heels. It would not take them long to overtake and capture him. All that he could then expect was a show trial for his supposed ‘betrayal’ of the Communist Party… This was a scene from the 1970 French thriller L’Aveu, starring Yves Montand and Simone Signoret, who both won praise for their performances. Less obtrusive was the performance of the black Tatra 600 Tatraplan, the car in which Montand attempted to evade his pursuers. Even so, the Tatraplan was a remarkable Czechoslovakian car, with three headlights and a fin on both its bonnet and its curved roof. A few months before the film’s premiere, Ghislain Mahy received a telephone call from the production house in France. They urgently needed a working Tatra, preferably the next day. Of course, Mahy had one and, with the promise of a substantial payment, drove it down to Lille as asked. There he was told that, after the shooting in Northern France, the car was also needed for further scenes in the mountains of Haute-Savoie. Would he be prepared to drive it there? ‘You must be joking,’ replied Mahy. He handed over the keys and said he would pick up the car from Lille when they had finished with it!

This Tatra T87, added to the collection in 1976, was not a film star, but in its way is just as remarkable as the Tatraplan. In fact, it was the Tatraplan’s forerunner, made in 1943. This four-door saloon had the same distinctive fin on the roof and a fog lamp positioned centrally between the two headlights. Instead of a rear window, it had two sets of slats in the boot lid and streamlined ventilation ducts on its sides to provide air cooling for the rear-mounted V8 engine. A sun roof suffused the interior with plentiful of light. It was, to say the least, an interesting design, which looked a little bit like a Zeppelin on wheels. This was no coincidence: the car was based on plans by the Hungarian Paul Jaray, who also designed the famous airship. Although super-fast and aerodynamically revolutionary, the Tatra became best known (or feared) for its poor road-holding. The slightest twitch on the steering wheel was enough to throw it out of a sharp bend, often with fatal consequences. During the war, it was popular with the German occupiers, but actually killed more senior Wehrmacht officers than enemy action! Between 1936 and 1950 Tatra built just 3,056 of these ‘SS-assassins’. However, its groundbreaking ‘space age’ look was copied plentifully by others – most notably by Volkswagen, who had to pay millions in compensation, because Ferdinand Porsche had shamelessly plagiarised the T87’s design for his Beetle.